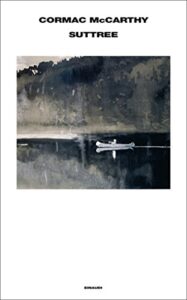 The Opus Magnum of McCarthy, Suttree, is a beautiful and terrible book at the same time, a poverty epic, of the irredictable poverty of the poor reduced to Archetypes of humanity, whose unique comfort consists of oblivion and alcohol, in a city scenario reduced to cloaca, degradation, greed, violence.

Sut the protagonist is not as poor as birth, though, he chose poverty to escape from the hypocrisy of his environment, he lives in a floating cabin along a river unclaimed of sewage, toxic waste, factory discharges, has a rowing boat ‘disgusting ‘ with which he keeps fishing in the putrid waters of the river, catish fish, aguglie.

The city is Knoxville in Tennessee, every attempt to live or high in this Dante degradation is as intended for preventive failure, nothing preserves by damnation, or ends up in prison, or participates in fights without strokes, or ruins Health with alcohol along with his alcoholic companions. Ocean Frog, J-Bone, Red, Callaghan, Billyray, Reese, this crowd of desperate whose destiny is however the common district. The immense AB, the mastodontic black that white justice kills a barrel sound for decades to suppress it, Leonard the pederast that piles the pension of the dead father concealing the body in the house for years, Richard the blind as a left Homer, Harrogate that rapes the watermelons, but there is a thread that combines all of them: the unfathomable solidarity that binds them against the enemy city, against blind justice of whites, the apprehension with which they are looking forward to have news of each other, if it serves something, the disinterested gift if one is hungry and thirsty.

Obviously primarily the reprobate by definition, Cornelius Suttree, the one who abandoned his power clan, which gave up all the privileges of his belonging class, who declined love, devote himself to a fisherman’s life, having as friends the worst of the local community, thieves, airlibrators, prostitutes, barriers, sweepers, guess, drunk and imbeciles.

Suttree is a dated book dating back to 1979, reed by Einaudi in 2014,  I repeat the literary masterpiece of Cormac McCarthy, for the literary idiom used in the narration conducted in a feat of accurate and effective reinvention of the stream of consciousness, with which it describes the existence grama and useless, violent, desperate of hordes of poor and unemployed, white and black hordes, all confluents on the degraded shores of the Tennessee river, often to awkward at the Sut veranda, around the year 1950.

What it detects from the pages consists of a continuum of images of devastated and squalid territories in which each is intended towards its abyss without appeal, decay which is first of all the body to which time does not allow truce.

Everything is intended irreparably towards the disaster or towards obsolescence, the body, the river, the floating house, the fish immersed by indiscriminate pollution. But also social relations, those friendly, those dictated by love. Nothing escapes this corrosion. You will say McCarthy: “Death is the only mathematical certainty, death is how life grants everyone” The Lives Around Him Are “Running Out Like Something Foul, Night Soil from to Cesmpipe, at Measured Dripping in the Dark”. The same Sun is nothing but a yellow hole lit behind hell.

Nothing is saved by this extreme resolution, in which, however each occurrence is observed, described up to the mannerism, in which nothing escapes its literary revealment, as if only the word of man could grant a possible truce to the general incineration, as if if the word itself engentered life as in the Old Testament the word of unnominable God create the life itself on Earth.

Every vital form is granted to the reader in its inexplicitability, which are vertebrates or invertebrates, territory and nature, the same word that can be opened to the right to residual faculty, ie an immense pity for man, for nature, for the starry sky. A poignant masterpiece, I said, a caposaldo book of the twentieth century.

Any cookies that may not be particularly necessary for the website to function and is used specifically to collect user personal data via analytics, ads, other embedded contents are termed as non-necessary cookies. It is mandatory to procure user consent prior to running these cookies on your website.