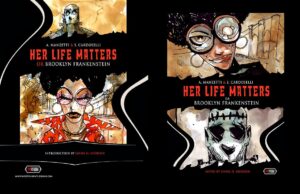 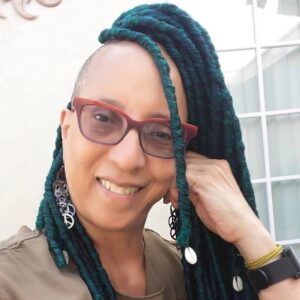 Hello Linda, nice to meet you. I’ve read several of your poems and I appreciate them very much. Thank you for granting me this interview for Satisfiction.

CS: During the first manifestations supporting the Black Lives Matters movement, how did the American writers react? Especially those who deal with fantasy, horror or simply genre literature.

LA: I feel that the BLM movement was represented in genre literature by attention highlighting publications missing diverse voices, not just as writers, but as editors. In addition, black publishers (like MVmedia, LLC) have come into creation, allowing publishing opportunities from the Black community. There is still a lot of work to be done, but the work and conversation is in the works.

CS: talk about Her Life Matters, for which you wrote the introduction. How did Alessandro Manzetti’s script seem to you? Do you think he has captured the delicate racial and feminist issues of the complex historical period we are experiencing?

LA: When I first read Manzetti’s script I was completely speechless. He beautifully balanced the message of inequality with influences of the Frankenstein story. The whole book is very entertaining and thought-provoking, at the same time.

CS: Cardoselli’s style is dirty, essential, sharp. Despite this, it manages to evoke (with the support of the script) a certain delicacy and nostalgia. As a reader what did you think of this Italian illustrator’s work?

LA: I was a fan of Cardoselli’s work before this book. In Her Life Matters, he uses negative space to bring huge energy to the images in each frame. He transmits deep emotions of the characters, drawing the reader into the story.

CS: you consider that the New York described by the Cardoselli-Manzetti duo is near or far from reality?

LA: The New York in the graphic novel felt very real to me, from the settings to the hair styles and clothes. The addition of music references from Manzetti deepened the feeling of NYC.

CS: my opinion, this comic book is not only an artistic denunciation of racism but also a feminist story told from the point of view of a monster. The parallelism is terrific, the “Frankestein’s creature” is more sensitive and rational than the human monsters that rage in the streets. How powerful do you consider, as a woman, Her Life Matters?

LA: When I first read this book there was no question of how important it was. I want everyone to read it, because my soul was touched by the message, while being uniquely entertaining. Manzetti’s deep human caring comes through clearly in this wonderful story.

CS: your opinion, is the editorial and literary scene giving enough space to African-American or black writers in general? Do you think that diversity and literary inclusion should be promoted through an anthology of black writers? It could also be useful for readers to know new voices, you would like to edit a project like that?

LA: The editorial and literary scene has changed over the last years, but has more work to do. Existing publishers need to put the work in to include all the different voices that aren’t usually read. I was delighted to be co-editor with Kinitra Brooks PhD (originator of the book idea), and Susana Morris PhD for Sycorax’s Daughters anthology (Cedar Grove Publishing), a horror anthology of fiction & poetry by African-American women. The anthology was a HWA Bram Stoker award® finalist.

There are several anthologies published in 2020 with new voices, an example of a few:

CS: again of the American scene, how was the Her Life Matters comic book perceived? Not everyone could appreciate the work of a foreign writer.

CS: of the aspects that I appreciated the most in the comic is the omnipresent, but never invasive, appearance of the music of the great black musicians. How much have personality like John Coltrane and Duke Ellington influenced African-American culture?

LA: Duke Ellington, John Coltrane, and other musicians rose from the African-American community to give birth to jazz, as a way to create music free from popular rules. Jazz represented freedom and  became a cultural movement influencing language, clothing and frame of mind, as well as inspiring writers and artists and was associated with the Harlem Renaissance. The fantastic writer Langston Hughes’ poetry was deeply influenced by jazz. Ralph Ellison’s novel, Invisible Man, which one the National Book Award, has been called a triumphant jazz novel. Jazz continues to inspire, I love listening to Miles Davis when I’m writing.

CS: you think it’s interesting to revisit the classics of gothic and horror to tell new stories? What story would you like to manipulate? I also heard of a future monstrous anthology in which monsters are the protagonists!

LA: Her Life Matters proves that the classics can be reborn in new ways and become relevant again. I think it would be interesting to play with the Strange Case of Dr Jekyll and Mr Hyde by Robert Louis Stevenson. I wrote a story inspired by the concept of Dracula, “Whispers During Still Moments” published in the Dark Thirst anthology (2004, Pocket Book), using biosonics as part of the power of the vampires. In the monster anthology you’re referring to, Classic Monsters, I’m working on a story influenced by The Blob.

CS: would like to ask you one last thing, horror is often described as a mix of blood, monsters and a lot of confusion, do you think Her Life Matters can change people’s minds?

LA: The thing is that horror has many levels under the areas of monsters, paranormal, killers and psychological. Her Life Matters has already found an audience, it’s on the final ballot for the HWA Bram Stoker award®! There are many horror readers who enjoy books with an edge and a message

Any cookies that may not be particularly necessary for the website to function and is used specifically to collect user personal data via analytics, ads, other embedded contents are termed as non-necessary cookies. It is mandatory to procure user consent prior to running these cookies on your website.